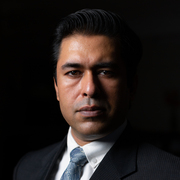 Here is a brief history of my life:

Born in Islamabad, Pakistan, my parents brought me to Bulgaria before my first birthday, and to Morocco when I was around two. This was where my schooling started, and where I won a silver medal in a worldwide children’s art competition. Wish I could remember what I created.

Until seven years of age, the only languages I spoke were French, Arabic, and my mother-tongue, Urdu. Maybe this exposure to various languages was what sparked my interest in languages, as well as different cultures.

After moving back to Pakistan, I had to start learning a strange new language known as English, which proved useful when we soon moved again; this time to England. This was where my entrepreneurial spirit was kindled, when I started selling my artwork to my primary school fellows. Another couple of years in Islamabad and the next destination was Singapore.

My four years in Singapore were mostly spent studying, including an attempt to learn Chinese. I got my first taste of working life there doing stock analysis and online trading, but soon enough, it was time to follow my parents back to Pakistan. It was in Islamabad that I started my technology career, but it was in mid-1998 that it really took off after I moved to Tokyo, Japan.

The first few months in Tokyo were difficult. Japan was recovering from an economic downturn, and there weren’t many jobs around, especially for people who couldn’t speak Japanese. Near the end of that year, I started work in Tokyo’s Akihabara district. Initially, I worked on contract basis, designing websites and trying to absorb whatever I could of this new thing (new to me) called the Internet, but soon joined as a full-time employee.

Around this time, I also got involved with local volunteer groups such as the Tokyo PC Users Group and the Tokyo Linux Users Group. At the turn of the millennium, I became a Red Hat Certified Engineer, and joined Vanguard, a dotcom startup, as a system administrator. This was around the time of the dot-com bust and the crucial round of funding that we were expecting never materialized. We were however, acquired by a decent-sized Japanese company, which went on to be an early-stage investor in Twitter.

In 2003, I left Japan and returned to Pakistan to start my own company. The timing was perfect since the telecom industry about to explode onto the scene. During this time, I took up a position with Pakistan’s biggest ISP. I initially headed their systems department and then the whole Network Operations Center for the North zone before the ISP was acquired by Orascom. I then joined Orgoo, an LA-based startup, founded by Sean Rad, who later went on to become the founder of Tinder.

In 2015, I enrolled in Founder Institute, and soon graduated with my startup, Iris Red. This was a platform for booking photographers online, and although we got off to a great start, I soon ran into a number of issues. Quality human resources were scarce, and we had trouble maintaining cash flow. By 2018, it was time to wind it up.

I am currently serving as the Public Relations Manager for Toastmasters District 122TC, and have a number of smaller projects in the works. I also provide mentoring, and training to other startups and those looking to brush up their technical and soft skills. My aim is to make a difference by playing my part in educating and helping others. If you are also looking for something similar, I would love for you to join me.

2 thoughts on “About Me”