Yesterday, I was in a meeting at the Aga Khan Foundation’s Islamabad office and we got to talking about everything the AKF is doing for the victims of the October earthquake. Other than the US/British (and NATO?) Chinooks, the only major helicopter fleet still delivering aid and evacuating the survivors belong to the Agha Khan Foundation. Both the UN and Pakistan Army’s choppers have pulled out and their role is now mostly limited to groundwork.

The figures in front of me of the aid coming in, tonnes of food distributed and relocated survivors were quite respectable. However, the best thing I saw were these shelters that the AKF has designed and is now distributing. Though not really a replacement for a brick and mortar house, they cost very little and provide at least some sort of protection against the harsh weather. 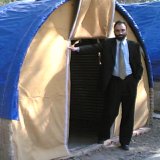 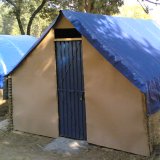 They have setup a few prototypes of the shelters in front of their office, walking distance from Marriot Hotel. The shelters consist of a corrugated metal sheet on a metal frame and covered by thick plastic. By themselves, the shelters will remain very cold in winters and extremely hot in summers, as pointed out by some people living in them. These people preferred to live in tents nearby to these. But with a coating of mud, mixed with straw, the shelters trap heat in winter and keep it out in the hot summer. It has been tested in extreme weather near the Karakorum mountain range so should perform very well in the (relatively) milder climate of the Kashmir/NWFP areas.

Kudos to the Aga Khan Foundation.