In a recent maintenance activity, one that lasted till dawn, the aim was solely to fix the horrendous mess of cables that had piled up over time at the data center. The mess was so bad that I was expecting to find some distant relative of the Dust Bunny somewhere underneath. Cablator, the evil midget that converts everything it rubs on its bald head into cables.

The operation wasn’t as bad as you might think though. Fresh cables were run following a properly defined path and the old ones were simply ripped out and locked away. There were some service disruptions during the few seconds when the old cable was plugged out and the new one was inserted, but these were quite minimal.

Here are the before and after pics of the same network rack: 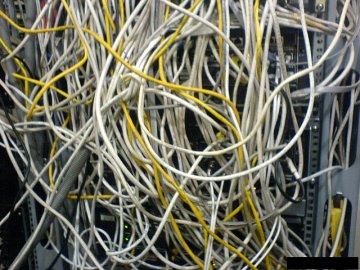 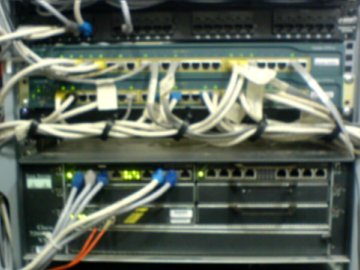 Ok, maybe the current view doesn’t look that impressive by itself. Some of the award-winning networking jobs that I’ve seen really are very good, but comparing to the before pic, it was a commendable and brave achievement.

6 thoughts on “Fixing a mess of cables”