Found this site, via Boing Boing, about signs outside various places all over Japan that prohibit foreigners or require them to be accompanied by a Japanese. Here is one posted outside an Onsen (or spring bath) in Hokkaido:

Though I didn’t experience extreme forms of racism while I was living in Japan, it is still quite rampant. In most cases, foreigners are simply avoided or ignored, but you can be barred from entering places, like those on the above site (and even deported if you’re unlucky). I remember a friend telling me how his boss never spoke to him directly despite him being fluent in Japanese.

Here is another sign from the same site that was quite hilarious and must have been posted during the 2002 World Cup, while I was still in Japan: 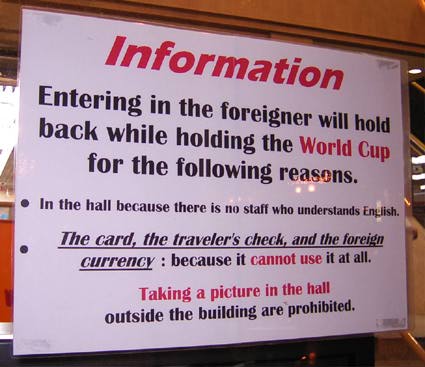