Though initially frowned upon as a Western concept and anti-Islamic, Valentine’s Day has become a full-blown celebration in Pakistan. When any culture adopts a foreign custom or celebration, there are bound to be changes to it and the origin for its practice is often lost. I witnessed this with many Western customs in Japan, such as Halloween or Christmas, and the same is true for Pakistan, though Valentine’s Day is usually just considered an excuse to share gifts and celebrate with the significant other. 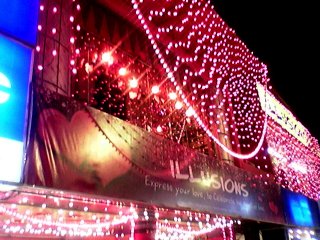 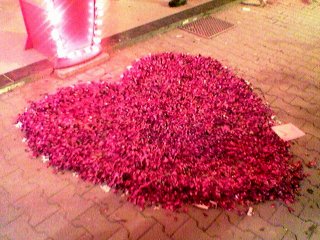 I was quite surprised with the preparations, sales and the crowds that were all geared towards this event. The whole of Islamabad’s Jinnah Super Market seemed to be celebrating it in full swing. The Illusions gift and CD/DVD store shown above had changed the whole theme of the store to that of red hearts. The store’s lighting was a shade of pink and giant hearts dotted the floor outside. Most restaurants and bookstores had also made similar adjustments to their look and feel. 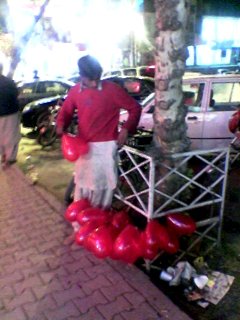 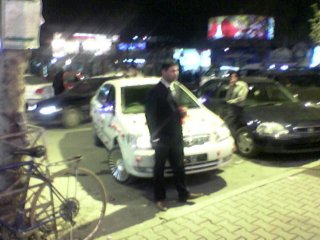 Baloon vendors have also caught on and could be seen carrying the distinct heart-shaped bunches of them the whole day. The one above was probably on his last run for the day. The person in the next photo may have been waiting for his date while having his photo taken next to the specially decorated car.

Though I have nothing about celebrating such events, they shouldn’t come at the cost of local and religious customs. The mournful month of Muharram, for example, has not passed yet and at least some thought should be given to it, whatever school of thought one follows. It is ironic that while even the staunchly religious have come to develop some level of tolerance for events like new year’s eve or Valentine’s day, Muharram is still considered something limited to the Shia community and even despised by a few.

It is also disappointing to see a lack of intellectual activities and tho whole focus being on partying and hedonistic behaviour. Why aren’t there any science fairs or days dedicated to conservation? Where are the debates and exhibitions on the future of mankind as a whole? When can we expect to see the adoption of the truly positive things that the West has to offer?

4 thoughts on “Valentines Day in Islamabad”