It has been a couple of weeks since I switched to my new hard disk. My previous 80GB drive had run out of space (I have a thousand different ways to consume all available disk space) and I was also getting a little bored with the Ubuntu 6.06 setup I did sometime last year. Unfortunately, with a laptop, adding space isn’t as simple as buying another drive and plugging it into an empty bay.

I did the next best thing. Bought a portable 120GB drive and exchanged it with the one inside the laptop. I then installed the latest Ubuntu 7.04 (codenamed Feisty Fawn) and moved my data back from the (now USB portable) 80GB drive. It was also a chance to get all the dust out of my laptop’s internals and arrange my partitions more efficiently. Things went exactly as planned and I was surprised to see everything setup just the way I wanted within a couple of hours. No unexpected hardware issues, no problems getting my old mailboxes and settings migrated. 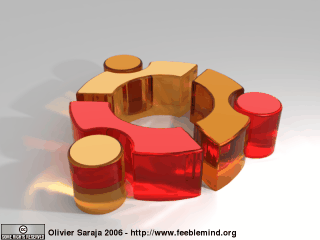 The only glitch happened with my Windows, which I had still kept on a separate partition for certain games and applications that I can’t run under Wine on Linux. The mistake was just copying all files to the new vfat partition and hoping that my boot loader will pick it up. Forgot about the boot sector. Not a biggy since I haven’t had any compelling requirement to use Windows yet.

So, what about Feisty Fawn? As I said, things went very smoothly, a bit too smoothly maybe and I failed to notice much difference from Dapper. The booting and shutdown sequences are more simpler and look a lot better.

One of the things I was very curious about was the desktop effects feature which is very cool, but as suggested, it really messed with my workspaces so it had to go. The icons are better and a number of packages are newer, but that’s about it.

Some of the things that I noticed after extensive use are that packages like Firefox 2.0.0.4 and Gaim 2.0 (beta) are pretty stable and seem to have less issues than their predecessors. The one-click installation of some common plugins, like Flash, actually works in this version of Firefox and it hasn’t yet crashed on a Flash-engulfed site like 1.5 used to.

A worthwhile upgrade. Plus, I have an 80GB USB hard disk to manage all my data.