You read it correctly. YouTube has been deemed unsuitable for 160 million people by some morons who haven’t a clue as to what the Internet is or how it functions. It’s hard to believe that there are people who can come up with such backward ideas and yet wield such power and authority that they can govern what we need and what we don’t. 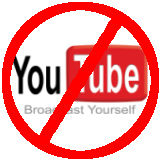 There is so much dirt out there that attempting to block any of it is akin to putting up a banner announcing its presence. Why do this if it will only attract more publicity and spread the message farther? Sometimes I get the feeling that these monkeys do this kind of thing deliberately. Either they want to spread the very filth they are claiming to censor or they’re covering up something that would expose their own incompetence or that of their masters (like the vote rigging videos some people have mentioned).

In the words of a fellow blogger, maybe these guys consider our brains to be so puny that we are unable to decide between right and wrong. Their faith may be so fragile that it can be shattered by something as simple as a cartoon or a few-minute video clip, but it doesn’t give them the right to block everything like this.

With broadband Internet spreading really fast in Pakistan, sites such as YouTube were proving to be very popular and useful for us Pakistanis. They provide an outlet for creativity while being a great source of entertainment and information. What exactly is this ban meant to do? Stifle all the wonderful work that we have lately been producing?

The whole design and concept of the Internet is such that attempting to restrict access to specific content is quite futile. Because of a single offending video, they blocked the whole YouTube site. What next? Wikipedia? Search engines? Might as well block the whole Internet while they’re at it.