Firstly, let me just say that despite my great love for participating in most kinds of sports and physical activities, the thought of watching a match from the couch doesn’t quite appeal to me (well, maybe with the exception of the FIFA World Cup). And when it comes to Cricket, I have neither the patience, nor the will to sit through a whole match.

But this post is about the only spot of good news that this nation has seen in a while. It comes after a long and bitter spell of the last few years, filled with the news of war, suicide bombings and all kinds of catastrophes.

As usual, I found other stuff to do during tonight’s Cricket World Cup Final. I didn’t even know who we were playing against until after it had started, but the final victory was instantly apparent as screams of joy and a roar of fireworks went up all around my area. 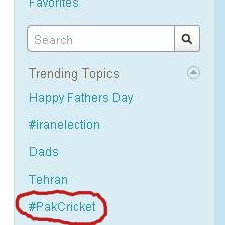 Pakistan had won the final match against Sri Lanka and were this year’s world champions. Even after midnight, the streets of Islamabad were littered with convoys of cars, music blaring and people waving flags. I couldn’t even get near Jinnah Super because of the traffic jams and ended up going to F-6 to enjoy a few drinks and catch up with friends. In most of the country, the party may still be on at these wee hours of the morning.

It was amazing to see Pakistanis finally united on something. We were so focused actually that we made it to the top five trends on Twitter for a while. Didn’t imagine Twitter being actively used by any but the most web-savvy Pakistanis.

Congratulations to all and here’s hoping we can show the same kind of unity and enthusiasm in dealing with the barrage of problems plaguing us.

One thought on “Pakistan wins the 2009 Cricket World Cup”