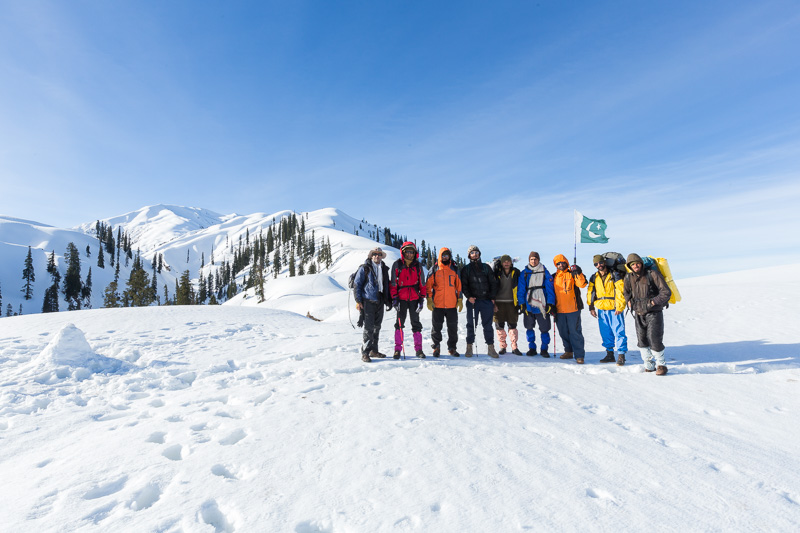 A few weeks back I received an invite from Maaz for a winter expedition to climb Makra Peak. We had planned similar expeditions before, only to have them canceled at the last minute for one reason or another. So, despite already having an extremely busy schedule, I accepted the invite with a thought that it likely wasn’t going to happen anyway.

As the date of departure grew closer, I started to suspect that this time, it might be for real. It was mostly gladdening since the proverbial call of the mountains had turned into a deafening roar after being away from them for over half a year. However, some panic also set in as I lacked the right gear for a winter climb. Physically, I hadn’t prepared at all and was lacking in stamina and endurance. Both are prerequisites for carrying up essentials; camera gear, food, clothing and one’s own body weight; through ice and snow. Tempted to back out, when the day arrived, I decided to wing it and see how far I can push myself.

The night we were to leave, Islamabad was being sealed off in preparation for the March 23 Pakistan Day parade. I was to join the team at the bus terminal at 3am and go onwards from there. My father was to drop me there and although we left home well in time, soon we were stuck in the middle of hundreds of trucks that were denied entry into the capital. It took some coordination with the traffic police and the truck drivers to get out of there and we made it just in time.

The Trek to Paye

The bus ride to Abbottabad allowed much needed nap time. Then we took a shuttle van to Mansehra and from there, a mini-van to Kiwai where Maaz’s local friends were ready with a jeep and awaiting our arrival. These amazing people drove us up to the hill resort of Shogran, did most of the heavy lifting and most importantly, led the way through the snow. Walking through even a light layer of untouched snow is exhausting work. These people carved a path through snow that was at least a few meters deep and allowed the rest of the team to follow without extra effort.

Shogran is a hill-top village 2,362 meters (7,749 feet) above sea level. From there, a few kilometers of slight incline takes one to Siri lake (2,590m/8,500ft) and then a steep ascent leads to Paye lake and meadows (2,895m,9,500ft). Makra Peak rises above the surroundings, standing at 4,000 metres (13,123 feet) above sea level. At this time of the year, everything above Shogran freezes over. Lakes and streams disappear under layers of ice and snow. Plants and rocks get completely buried and only the tallest trees manage to stand out.

Our plan was to reach Paye on the first day, spend the night there and attempt Makra Peak the next day. The first day’s plan was already quite ambitious. Another team had arrived in Shogran before us and aimed to reach Siri by nightfall. However, realizing how treacherous the snow was, they conveniently stayed put and allowed us to go ahead first.

We were into deep snow soon after leaving Shogran. Although the path through the forest isn’t very steep here, it was still exhausting work. We reached Siri at about two o’clock in the afternoon. Quite a feat, given the experience and stamina level of some of the team members. For Saad, it was the first time climbing a mountain, let alone a snow-clad one. The steep trek to Paye lasted over three hours and took every ounce of our remaining strength, but we made it before sundown.

Most people picture Paye as rolling green meadows. Our efforts were rewarded with a stunningly beautiful frozen landscape. Even the wooden huts we were to stay in had almost completely disappeared under the ice. This was soon remedied by digging through the ice and creating a channel to the wooden door.

Once inside, we lit a fire in an attempt to warm up and dry our completely soaked boots and clothing. It didn’t help much, but the fire was a good psychological boost. The pink glow of the setting sun over the surrounding landscape was worth capturing, but at this point, not even the lure of amazing photos could move us and we set about preparing for the cold night ahead. Sleep came almost instantly.

The fire must have died out sometime before midnight or someone may have put it out earlier. The sheer cold woke me in the middle of the night and I must have spent hours trying to stay warm in my light sleeping bag. Though quite tempted, I simply didn’t have the energy to get up, get out and shoot the amazing sky above.

Finally, I realized that at least a few others were also suffering the same discomfort and that it was almost dawn. Hasan and I plucked up the courage to go out and managed to take a few good photos. By this time, the Milky Way was barely visible due to the rising sun’s glow, but the rest of the landscape was worth the effort. The snow had also frozen solid, allowing an excellent grip on the surface.

It was time to prepare for the final climb. Here, I made two critical mistakes. Firstly, I missed out on breakfast while I was out with my camera. Secondly, I decided not to carry extra water. Six of us set out while the other three decided to stay behind at the camp.

We had two paths to reach the top of the peak. One was a direct ascent over the foothills, which meant climbing up and down three hills before the final ascent. The other was a shorter, but more treacherous path through the adjacent valley. We chose the latter.

Hassan had trouble getting a foothold on the hard ice and had to turn back before we entered the valley. Maaz, Shams, Babar, Arif and I went ahead, traversing the steep wall of the valley. Although the valley didn’t look very deep, a small slip here would have been fatal. The rocks and trees below would have dealt a severe blow to anyone tumbling down. The rising sun was now causing the ice to melt and made the move more exhausting.

We reached a point where an overhanging rock made it dangerous to continue or climb above it. It was time to climb down the steep slope. The others did this facing outwards, though I found it easier to face the ice and climb down as if it was a ladder. It worked pretty well.

Halfway down, the valley wall was free from trees or rocks and we decided to slide the rest of the way. This brought us to the valley floor which was mostly still in the shadows and frozen. After a short break, we continued onwards and could see Makra Peak ahead of us.

The solid ground made it easier to walk over it and the frozen channel was an amazing sight. However, by this time, I was suffering from severe dehydration. Realizing that nobody had brought water and there was only a single bottle of orange flavored drink for the whole group, I made a hasty decision. I decided to head back to camp and return with my invaluable water pouch. It would not only resuscitate me, but also act as a backup for the rest.

Despite my insistence to go alone, the rest of the team asked Arif to accompany me. The move back was gradual, but both of us made it without much trouble. We also met one of the guides from the other team here. His team had chosen the longer route over the hills, but he separated from them to try out our path instead. Smart choice.

There was little liquid water back at the camp, but I ate a few dates, put a few gulps of what water was available in the pouch and headed out. In the back of my mind, I knew I had missed the opportunity and the resulting emotions blurred my thought a little. However, Arif and Hassaan advised me to rethink things. In all my travels, I have rarely backed away from a challenge, pushing myself to the limits. When I have had to stop, it is usually due to time constraints. This time, I gave in and let cooler heads prevail. The next few hours were spent chatting with the team and following the barely visible dots moving up the mountain.

As mentioned earlier, all that the team had for sustenance was a bottle of orange drink, plus a few dates. At one point, even these became too cumbersome for them to carry and they left these behind for the return journey, along with other equipment. Unfortunately for them, the other team thought it was a gift for them and helped themselves to it.

The team reached the summit at about noon and were back to the camp by 3:30pm. Must have set a record for doing this in such a short time and at this time of the year.

We all had hot soup, some instant food and a hot cup of coffee. The rest of the day was spent relaxing (as well as answering the vital call of nature) until the warm sun disappeared behind the mountains and the cold winds took over. I stayed out shooting, until the pink afterglow of sunset disappeared from the landscape.

We had a few boiled potatoes for dinner and once the rest had hit the bed, Hassan and I went out to capture a few Milky Way shots. The stars were even more impressive than the last time I was here. However, due to the biting cold and threat of predators, we couldn’t spend a lot of time here. Back in the hut, everyone had fallen asleep. Although I wore extra clothes this time, the cold was worse and we endured another sleepless night.

We broke camp early the next morning and after a few group shots, headed back down. The steep slopes that were a challenge on the way up were instruments of fun on the way down. We had no trouble sliding down these in a fraction of the time it took to climb them.

The pace slowed a little by the time we reached the forest, but our feet had grown accustomed to the snow and ice. So much so that we managed to keep pace with the locals and reached Shogran in a mere two and a half hours of leaving Paye.

After a meal and more group photos, we bid farewell to Arif, Shoaib and Shams. Babar drove us back down to Kiwai and we took another mini-van to Mansehra.

A tragic event near Balakot marred our feelings of joy and euphoria. A vehicle had slid off the road and fallen straight down into the River Kunhar. A number of rescue vehicles had arrived, but with such a sheer drop, there wasn’t any chance of survivors. Standing right at the edge, we couldn’t even see it. We probably will never know the fate of those that fell.

Upon reaching Mansehra, we discovered that the buses would not be running for several hours. Instead, we took a local van to Rawalpindi. I reached home by dusk while the others headed back to Lahore.

And so ended an epic adventure, the first successful climb of Makra Peak this season. It left us more confident, refreshed and better prepared for the next challenge.