I remember a time when I was a kid who eagerly awaited the month of March whenever in Pakistan. Even before the month started, troops and tanks would start gathering around what is now the sight of the luxurious Centaur hotel and the adjoining shopping mall and they would start practising in the then quiet areas of the capital. A few days before the national day, air force jets would also start practising their tricks above the capital and everyone would be out to catch a glimpse of them.

How things change. Though the 23rd March parade, which features everything from tanks, guns, troops and aircraft to various student organizations and all kinds of artists, didn’t materialize for the past few years, it was set to happen this year. But the enthusiasm of everyone seems to have vanished. It was just another boring holiday which most people (including yours truly) loathed. The fancy parade was held within the confines of the sports complex instead of out in the open in front of the presidency. I doubt many people even bothered to see it on the tele. 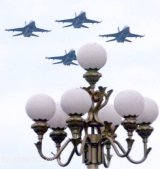 To sum things up, Pakistanis seem to be more occupied with their lives and have little time or will to bother with such festivities. All the security measures and the terrorist threat have taken their toll as well. Then the recent political crises have greatly reduced the popularity of the government and catching a glimpse of our glorious leaders isn’t everyone’s priority.

On the positive side, the event was more scaled down and didn’t have as much of the national budget thrown at it as compared to times past. And off course there should be no restraint in awarding medals and honors to those who truly deserve them. Maybe they should consider holding more constructive events on such occasions to involve all of us who are increasingly finding such times devoid of anything positive.

One thought on “A slow Pakistan Day”