While those of us outside the US wait for Apple’s iPhone to arrive (sometime next year for Asia), China is rushing in to fill the demand with clones that in some ways, outdo Apple’s sought-after gizmo.

The most promising of the clones looks to be the Meizu M8 miniOne, identical to the iPhone, but superior in many ways. It boasts a 3 Megapixel camera vs the iPhone’s meager 1.3 Megapixel, has 3G support and runs applications that the incumbent doesn’t. A side-by-side photo is given below. 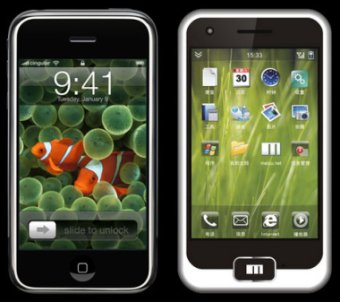 One that aims to be pretty much a replica of the iPhone is the P168, seen below next to a photo of the original. It seems to have a very cheap look and feel, but if it costs less and is available NOW, it will definitely do some damage to Apple’s market share. The 6-speaker surround sound and dual-SIM support are also plus points for the P168. 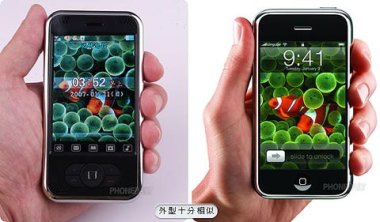 The main feature that is missing from these clones is iPhone’s multi-touch display. Without it, these clones are missing out on something big, yet despite this drawback, they pose a formidable challenge to Apple due to the low pricing and worldwide availability. Besides, the multi-touch display technology was developed in China. It shouldn’t be long before the Chinese cloners figure out how to incorporate it into their clone army.

All this may be old news now. However, it is a small demonstration of the growing power that China has these days over the world’s economy. This article, titled “China’s iClone” is an interesting read and offers some interesting suggestions on where China is headed. It looks like it will follow the same path of progress that Japan and Korea followed during the last 30-40 years, but at a much much faster rate.