It has been a few days, but Eid Mubarik and season’s greetings to everyone. Though it was a peaceful celebration for most of us, it wasn’t true for all. A large number of people in the NWFP province were killed by a suicide bomber during Eid prayers.

Nothing can justify the taking of another life, but the ignorant may be fooled into believing that a suicide attack against an infidel would grant them a place in heaven. What boggles my mind is how the hell can this be true if the very people you are killing are in the midst of prayer?

Overall, it was an usual Eid since it coincided with 25th December, another national holiday in Pakistan (no, not to celebrate Christmas, nor a former thug’s birthday, but that of Jinnah, the nation’s founder). Most Islamabadiites took advantage of these extended holidays and left to celebrate Eid elsewhere for once, while those from out of town had gone back home, leaving most of the capital hauntingly empty. 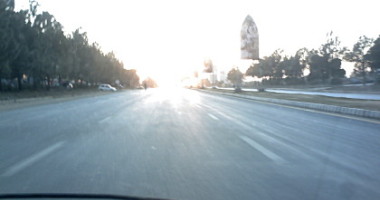 This really disappointed some of my friends who, for the first time, had decided to stay in Islamabad. The emptiness really seemed to get to them. The rest of us however, tried to make the most of it. It had been a while since I enjoyed driving on wide, empty roads without any limits to speak of. The photo is of Islamabad’s main highway which isn’t this empty even on a Sunday. And there was no trouble finding parking anywhere. The hiking trail was pretty lively though and the good company and nice weather made it one of the best climbs so far.

As for the Eid sacrifice, we didn’t get a separate animal this time. That requires scrutiny in buying a flawless animal, then looking after it till the time of the sacrifice and finally cleaning up afterwards. Instead, we took out a share at a mosque and got the meat when it was ready.

The rest of the holidays were lost somewhere between distributing the sacrifice meat (it is to be divided into three equal parts with one meant for the poor and needy, another for friends and family and the third for your own consumption) and visiting relatives or inviting them for meals.