Just got home (at 2am) after being stuck on Islamabad’s roads for a few hours. Cars, bikes, vans, you name it; they were all out on the  roads, crawling at a snail’s pace and blocking all intersections. 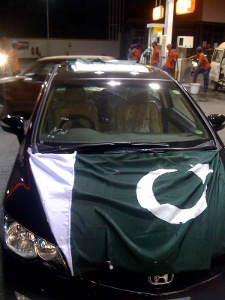 However, it was nothing to be mad about. Pakistan’s 62nd independence day is here and the party has just started.

Seeing all these people, one forgets all the trouble this country’s been facing. Terrorism, inflation, unemployment, instability; tonight, these appeared to be the last things on anyone’s minds.

There were even people riding bicycles while waving the national flag and it’s an even bigger celebration than the recent one for the Cricket world cup win.

A friend of mine once called the Americans the most flag-waving nation on earth. Guess he should visit Pakistan on one of these occasions.

This show of spirit, which was partly just letting off some of the pent up steam, is encouraging. I hope we can all continue with such energy and channel it into productive ways.

Congratulations to all Pakistanis for making it this far, despite the odds.