Playing football has been the most enjoyable thing I’ve done within the past week. Though I’ve played it on and off for quite a while, this must be the first time I’ve actually been good at it. And I’m not even talking about competing against my above-30 (and overweight) friends. These are my current and ex-colleagues, mostly in their 20s, who aren’t all that bad at footy (maybe it’s due to the cool new shoes). 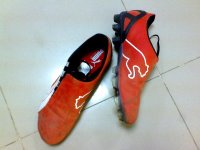 Football, however, still isn’t the most enjoyable sport I’ve ever played. It’s been over 5 years since I last snowboarded and have longed to do it again, yet any plans to explore the wonderful slopes of Pakistan’s Northern areas have suffered a serious setback.

Pakistan’s sole ski resort, the one at Malam Jabba, has been burnt to the ground. It appears that the militants who have lately terrorized the beautiful Swat valley, decided that the resort was too good a thing to leave alone and torched it completely.

That shouldn’t stop an avid snowboarder, but it’s unlikely that I’ll have the time, money or the company to organize a trip to the still safe and untouched mountains up north. A trip that will involve searching for a suitable slope, mapping a route down and a way to get back up again. Another trip to Hokkaido will probably be easier.

3 thoughts on “Football and the late Malam Jabba ski resort”